I was born in Athens, Greece in 1991. In 2008, I moved to Corfu, Greece in order to begin my studies at the Dept. of Audiovisual Arts of the Ionian University, intending to become a music producer. Within the first six months, I knew cinema was my thing, so I returned to Athens and focused on gaining knowledge and experience on screenwriting, directing and editing, while keeping music as a hobby. I ended up studying Film Directing.

In 2016, I won my first editing award for Without Milk. Three years later, my short script Burn was awarded by the Greek Screenwriters Guild.

I keep working on films, TV commercials and music videos as a director, assistant director and editor while my short film project Burn is in development. I still produce music and write short stories in my free time (if any). 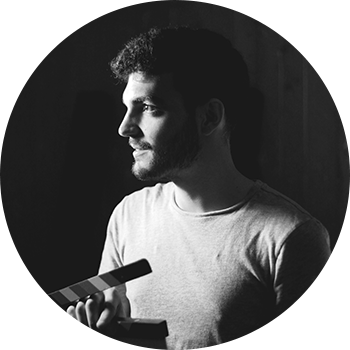 Narrative film is my main focus - still, I am excited to edit any story- or concept-driven piece, be it a commercial, a video art work or a music video.
I'm always searching for meaningful cuts that help characters go forward, visuals to form a choreography, stories to be told in the best possible way.

As a budding director, I'm also working as an assistant director (and enjoying it a lot). I've been hired on both film and commercial environments, and have managed to create shooting schedules that are both realistic and on-time. My organizational skills really help in that. :)